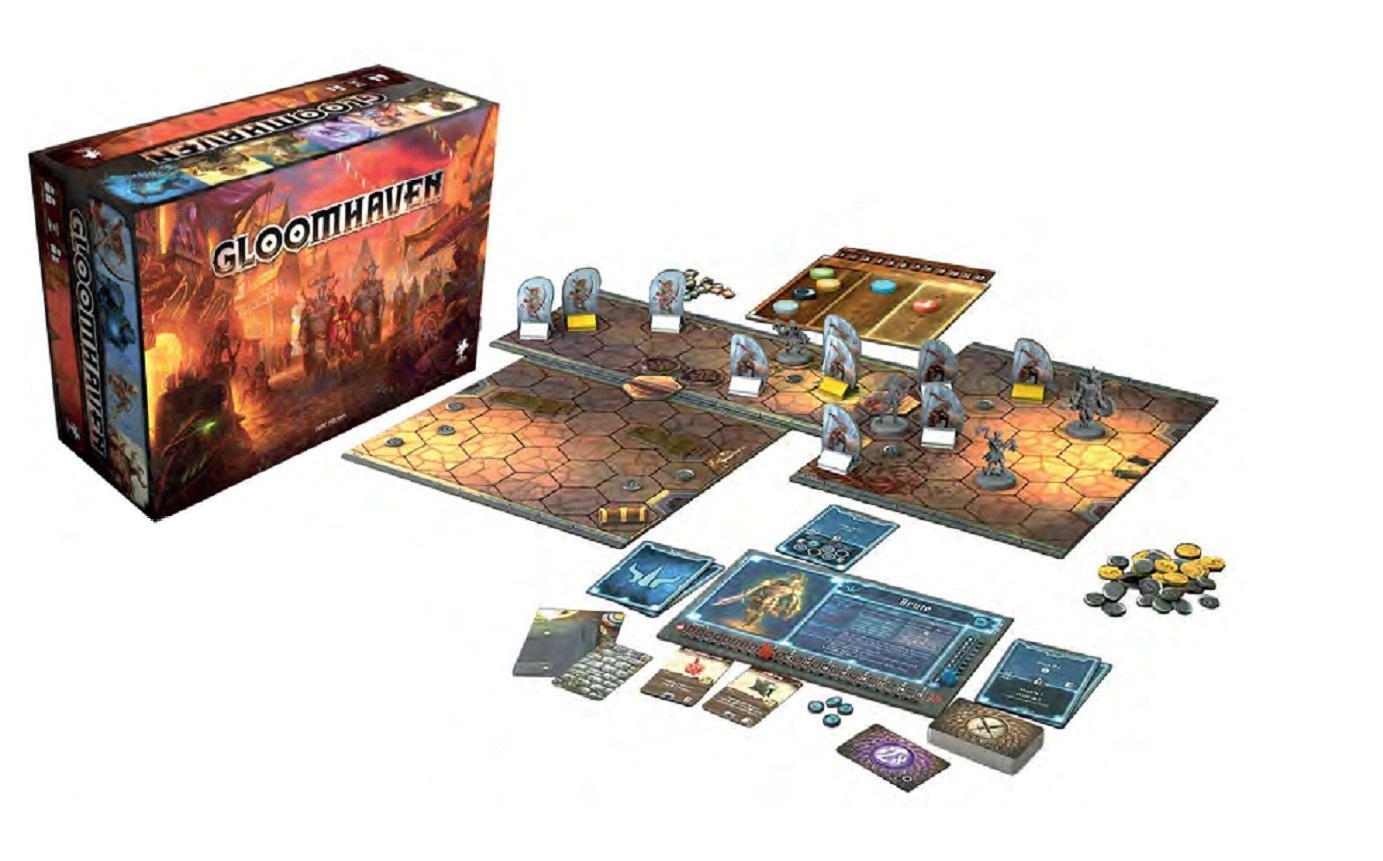 I finally got around to playing Gloomhaven, after purchasing the behemoth game MONTHS ago and not touching it (a common theme for me, I have a problem).

This game is seriously impressive. For those not in the know, Gloomhaven is absolutely MASSIVE:

(Cat in box lid for scale)

The contents of that monster box are extensive: a thick packet of scenarios you can run, individual miniatures for each of the 17 classes, a separate box for each class containing a character pad, ability deck and ability modifier deck, somewhere between a million and a bajillion cut out standees for baddies and terrain, a map of the entire countryside you’ll be exploring, large interchangeable map pieces for building scenario maps and an actually reasonably sized rulebook, surprisingly. So yeah, lots to work with once you crack it open and spend a day or two punching everything out of the cardboard sprues (also known as “Nerd Meditation Time”).

“I know we haven’t gotten into it yet, but I gotta say… I’m feeling overwhelmed,” said one of the folks I was playing with as we were setting up. Its true, it’s a freakin’ TON of stuff to see all spread out at first. Honestly, that’s where the beauty of this game comes in. There are just buckets of pieces and components, a crazy amount of things you can do when in the the city of Gloomhaven, events that trigger in the city, events that trigger on the road, and then the scenarios themselves, which all have their own individual rules and whatnot. There’s tracking elements, applying status effects to yourself and to your enemies, the ability modifier decks, enemy decks, discarding cards, losing cards, long rest, short rest.

But it all just…. flows.

It was the weirdest thing reading the rules before jumping in and thinking “wow, this is a lot to remember,” but once we got into it and did the first scenario step by step, it all just kind of flowed together. It definitely helps to divide responsibility, having one person track the elements each round, having someone else track damage to NPCs, stuff like that. By the time we ended, the longest periods of space in gameplay were setting up the scenario map, which is honestly always a problem in these sort of games, and, God love her, Tee’s inability to remember to draw her two ability cards for the round (there was a cat and she got distracted).

Scenarios break down into various turns, those for the players and those for the NPCs. The players decide two actions they want to take by picking two cards from their hand. The cards are divided into top actions and bottom actions and each player will do the top action of one card and the bottom of the other, not necessarily in that order. Each NPC will perform whatever actions are listed on the card drawn from the top of a deck designated to that particular NPC type. Initiative, or who goes when in the round, is decided by initiative values on the cards, with the lowest number going first and proceeding in ascending order to the highest number. The abilities themselves allow the players to move, attack and do various other character specific things to make their way through the fairly thick horde of villains in front of them.

Once a scenario is complete, the players have the option to return to continue on to the next mission, thereby triggering a road event that adds a little more flavor to the game, or the can return to the city of Gloomhaven, where they can stock up on items, do some city events, donate to a temple or even change out characters.

As a long-time player of RPGs, I haven’t really done too many RPG-in-a-box type games. I own Legend of Drizzt, but just have not found a good opportunity to play it. That being said, I was amazed at how reflexive this game felt once we started playing. It really does an excellent job at capturing the feel of an RPG without requiring a GM to control the NPCs. The NPC abilities are varied and often complex, making them feel like living players and not just simplistic baddies. I’m reminded of games like Zombicide, wherein the NPCs sort of just constantly move a set amount and attack a set amount, which works for a game about zombies, but would feel very flat in a game of this style. The scenarios have decent fluff text providing plenty of detail to set the scene, and the character races and classes are interesting and unique, and not just derivatives of the standard fantasy races like elves and dwarves.

On the note of the races, I LOVE the art in this game. Everything has a thick layer of darkness on it, which is perfect for a game with “gloom” in the name. It all really sets the scene of a dark and dreary portion of a fantasy countryside and just pulls you in. From the tiles to the design of the NPCs to the super unique character design on the player characters, it’s just incredibly well done. It’s all just simultaneously spooky and brutal and elegant and it just feels so damn medieval.

If I had any complaints, it would really just be two, and both are fairly nit-picky. First, I don’t think they handle failure very well. The game is fairly difficult, which in itself isn’t the problem. However, it is pretty forgiving with failure. Essentially, if you succeed in a scenario, you get rewards and unlock a new scenario. If you fail and all your party dies (or “becomes exhausted” by this game’s terms) then you just are kinda there. You can redo the scenario, go back to Gloomhaven, whatever, but that’s it. You don’t lose anything earned from the scenario, including experience and loot. It’s as if your characters all get knocked out and then just kind of stand back up to find the bad guys setting everything back up as they politely ask you to wait outside while they get ready. It’s a little weird and immersion breaking. I think it would be improved by at least having you lose loot. That way it’s more like you got knocked out, robbed, and dumped outside. Or maybe REQUIRING you to start back at Gloomhaven, thus requiring a Road Event if you want to try to scenario again. Maybe this is just me, but it just seemed a little bit like the designer just didn’t really want to focus on loss conditions. Anyway, I might make the return to Gloomhaven thing a house rule next time we play. NOTE: This could just be me missing some part of the rules, but I scoured the book and the internet for something on how to handle failure and came up with nothing.

My only other complaint is just a standard one with map-tile and scenario based games: SO much time between scenarios is spent finding all the map tiles and baddies you need for that particular level. It just adds a large lull to the game, but it’s honestly unavoidable.

All-in-all I think Gloomhaven is an excellent choice for a group of RPG loving gamers who would like to commit to an RPG but cannot decide who should run it. It is definitely not a game for casual players, what with all the set up and the $150 price tag, but it is an excellent game to add to anyone seriously interested in dedicating that time. Great investment, great game and an overall stellar experience. So thank you, Isaac Childres and your team of artists. You guys seriously did some grand work here.